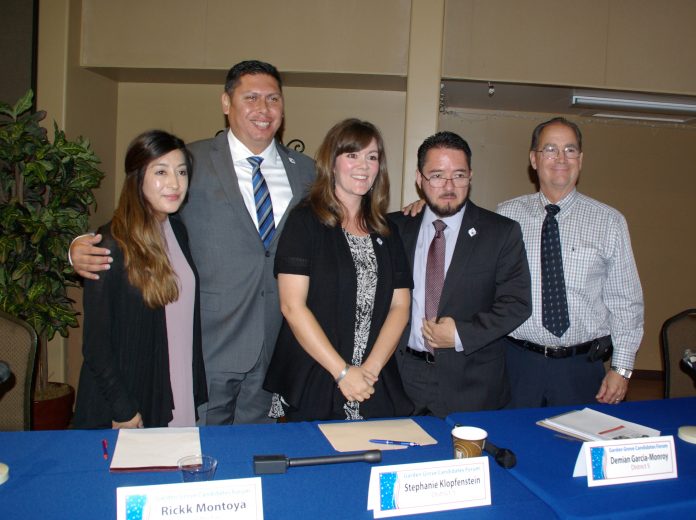 BY LOREEN BERLIN: As November and the General Election draw near, the political scene is heating up around the country and county, including in Garden Grove.

Saturday, for four-hours, those running for mayor, City Council and the Garden Grove Unified School District Board of Trustees voiced their positions during a candidate forum.

BY LOREEN BERLIN: As November and the General Election draw near, the political scene is heating up around the country and county, including in Garden Grove.

Saturday, for four-hours, those running for mayor, City Council and the Garden Grove Unified School District Board of Trustees voiced their positions during a candidate forum.

”If you care about our city and where it's headed in the future then you'll want to hear what your local candidates have to say," said Maureen Blackmun, president of the Garden Grove Neighborhood Association. "Saturday, please take a few hours out of your day to come to the only candidate forum in our city," her invitation read.

"I'm excited to be your next Mayor of Garden Grove," said Jones. Jones attended local Garden Grove schools, graduating from Rancho Alamitos High School, noting that he served on the Planning Commission for eight years before being appointed to the City Council after Janet Nguyen ran for and won a seat in the State Senate.

"We have an opportunity for a renaissance and revival of Garden Grove and I'm looking forward to that," said Jones. "I'm looking forward to the major district representation and looking how we can allocate our resources. I’m the right guy to bring people together in an environment of cohesiveness, putting my heart and soul into the city.”

Flores said he is running because he thinks people should have more than one choice for mayor. He wants to work on the Brown Act in his first four months if elected and wants to hold a mayor's open day on some Saturdays at different residents’ homes.

"I get up every day at 4 a.m., so I know what the working person goes through and I think we can move in a more positive direction," said Flores.

On code enforcement, Flores said he doesn't think it needs to be out-sourced.

"I think we should have some volunteer enforcement; it can be done without risk to the community with input from staff and citizens," he said.

"Code enforcement is difficult. We have homes that are 1,000-square feet by design, that have three-bedrooms and one bath and there are definitely some problems," he added, noting that he has been approached by citizens about those issues. "That is a discussion that we can have, being aware of ethnic sensitivities as code enforcement affects those individuals."

Jones said that because of Pop 47 and 81 there are more criminals on the street. "They know how to stay under the radar. We have 100 police officers and could use 200 and I know in the next four years, the police would like to see that," he said. "We are a lean and mean operation, so we can't cost-cut to do that.”

There appears to be somewhat of a division of those who favor continued building along Harbor Boulevard to attract over-flow visitors from the Disneyland area and those who are not of that thinking, wanting more attention to be on small businesses.

Jones pointed out that $20 million comes from hotels and that $4-6 million additional will be in the next budget year from the Great Wolf Lodge.

"That is the single greatest thing we have done. It was a brilliant vision of those who were on council before me," said Jones. "And there are still things coming down the pike such as Great Wolf adding 200 plus more rooms."

There was discussion of unions, with some pro and some con, and some good coming from it.

Flores wanted to make sure dollars were coming in to support the police and fire and city employees who have also been running a "Lean and mean" operation for awhile.

The city has been divided into six districts, with the hope of representation from all areas of the city by citizens living within those districts.

One of the questions asked was about further development on Harbor Boulevard. Candidate Clay Bock from District 3 said he's 100 percent in favor of the Harbor Boulevard developments and the planned Vietnamese War Memorial that will be south of the Great Wolf Resort.

"We need a clean, safe and prosperous Garden Grove City," he said.

Candidates were asked about unions coming into Garden Grove.

Candidate Demian Garcia-Monroy, District 5, said unions have provided a 40-hour work week and that they hire at good wages.

"Using unions makes it so you don't have to go back and redo a project that's not done right," he said.

Bock said he's not against unions but doesn't believe in forcing people to join unions. "I would like people building in Garden Grove to be able to hire who they want," he said.

Candidate Kim Nguyen, District 6, said asking about unions was not a yes or no answer and wants to make Garden Grove a better place for everyone and to encourage people to work and buy in Garden Grove.

Candidate Rickk Montoya, District 6, said, "Yes, I would support unions because they fight for an honest wage and union groups will protect workers in Garden Grove and we need to make sure we support the local residents."

On fixing the $4 million budget deficit, Klopfenstein said she feels retail shops in Garden Grove are needed to bring money into the city and that there needs to be a "Strong management team."

Garcia-Monroy said he believes bringing more Head-Start programs into Garden Grove would alleviate child-care issues and that the city needs to bring in foot traffic.

Bock said he will cut any waste in the city and money coming from the resort areas on Harbor Boulevard with the 17-cent bed-tax at the Great Wolf Resort and the proposed expanding of 250 more rooms at the Great Wolf, would bring in increased revenue.

The issue of the ever-increasing homelessness not only in Garden Grove, but the county as well, was addressed.

As police talk to the homeless they find some don't want to take advantage of help that is available, while some will accept help, but there are many levels of homelessness from veterans being on the streets to drug users and those with mental health problems.

Bock suggested giving the homeless work to do in helping clean up the city, while making a wage and then giving them a place to sleep at night.

Garcia-Monroy mentioned that there are a lot of resources for the homeless and that a federal $13-billion dollar program has been passed and he wants to make sure Garden Grove reaches out for the city's fair share.

"The police need to have a homeless task force and we need to support them so they can do that," said Garcia-Monroy.

Klopfenstein said Garden Grove should pay attention to the Santa Ana Civic Center homelessness crisis and see how that works to see what would work best for Garden Grove.

"This is a national issue that we need to take time to figure out," she said.

Montoya said people are not feeling safe in the local parks around the county and that is a "Quality of life issue." He suggested short-term hotel vouchers for homeless and working together as 32 cities within Orange County for better results.

Nguyen said the homeless are on every street corner and that Garden Grove needs to attend cooperative meetings to get working ideas.

"Many of the homeless have chronic conditions and mental issues and drug addiction; they won't come to us, we need to go to them and have a conversation with them."

Candidates were asked what excites them about the future of Garden Grove.

Klopfenstein said she wants to focus on all residents to enjoy being in the city and is interested in helping people want to stay in Garden Grove and participate in the activities offered.

Bock said there are a lot of positive things taking place in the "Great city where I've been for 30 years, and I want to encourage more to happen in downtown with music and food."

Garcia-Monroy said the recent districting gives a possibility to elect people who care about the community and he wants to reach out to residents who are not well-to-do. "I would like to have all ethnicities come together to celebrate our diversity."

Montoya pointed out that this will be the first time the city is going to have people represented from their individual locations.

"I'm enjoying walking door-to-door talking to people and I think we'll have a ton more people coming out now that they have someone they know cares about them."

Klopfenstein said fresh new faces on the City Council and a good working staff is a good thing.

"Star Wars on Main Street brought out a lot of people and I want to see more of that and those types of things that people can walk to."

Garcia-Monroy said he wants to beautify the small business districts and remove graffiti and find creative ways to increase revenue for the city.

This is the first time in the 60-year history of  Garden Grove that people within the separate districts will be able to voice what is going on in their area and have it addressed, since what is perhaps an issue in one part of the city is not a concern in another area.

Therefore, the soon-to-be elected officials will be accountable to their part of the community.

It was expressed that safety is a big issue and that people want to feel safe to walk their kids to school and have safe streets.

Candidates said they want to be the voice for their community and for the future of Garden Grove and focus on all people in the city.