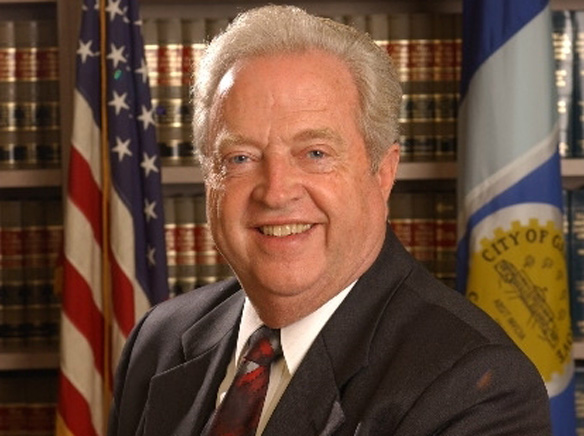 Revered city official and former police officer William “Bill” Dalton has retired from public office and said he  looks forward to spending more time with his family, including grandchildren and great-grandchildren.

Revered city official and former police officer William “Bill” Dalton has retired from public office and said he  looks forward to spending more time with his family, including grandchildren and great-grandchildren.

Dalton, who served on the Garden Grove City Council for 14 years, said when duty called, his jobs came first as he juggled work and family life. Now, he can attend basketball games with his grandchildren, with a granddaughter who plays basketball at Mater Dei High School, along with attending two grandsons ‘games at Mater Dei High as well.

He also has an 8th grade granddaughter and 7th grade grandson who play sports at St. Columban Catholic School in the community.

“It's the great part of being retired, that I can do that now,” Dalton said. “For the smaller grandchildren, I can throw a ball to them as a grandparent; being retired allows me to do that,” he said. “It's a combination of things that retirement brings, being able to travel and not have to check a work schedule as you do in your career years. It goes way back when I was in police work. I had to miss graduations, celebrations and holidays due to working shift work.”

Dalton said that while he was working, wife Sandy would perhaps have to go to a graduation while he was fulfilling his civic duties.

“That occurred a couple of times, so now, I have the time to watch the Strawberry Festival parade and have time to do things with the grandkids,” he said.

The first thing he and his wife did after his retirement as mayor of Garden Grove was to take a two-week trip to Hawaii with friends; they plan to take a trip to visit his sister in Northern

California and will take some trips with long-time friends they have traveled with in the past, but will have more time to spend on the next trips, without saying, “Let me check my schedule,” he said.

“That was part of being on City Council and being mayor; it was part of the job. It was a commitment,” Dalton said. “My family has been good about my having to do that as a council person; they were used to it from when I was a police officer,” he said. “It was pretty much that we were not going any place for a long-term stay.”

With retirement, the Daltons plan on continuing to live in Garden Grove.

Dalton said within his work, he has tried to treat people like he wanted to be treated. “My parents taught me that,” he said.

Garden Grove in 1967 because he wanted Garden Grove to be a safe and good place for his family as well as everyone else.

In the community, Dalton has been described as direct and stern, but kind and always accessible to the public he served.

He retired as a police lieutenant after 26 years with the Garden Grove Police Department.

Dalton was a SWAT team member and a patrol officer, where he earned a Medal of Valor, which is one of only seven issued in the department’s history. He stopped an armed robbery without deadly force – a rarity, then Police Chief Kevin Raney said.

Dalton is credited with earning the trust of the business community by going out into the community and meeting with business owners and learning about their needs.

His goal was to promote a safe and secure environment  by identifying problems and providing solutions and to equally represent all of the people in the community.

Dalton said he always considered himself a public servant.

He received his bachelor's degree in Administration of Justice from California State University, Fullerton.

He and his wife are the parents of five children: Pamela, William Jr., Paula, Bob, and Brian.

Dalton has a hobby of collecting police and fire badges and patches.

Dalton, who credits his fellow council members for the area’s make-over, is proud of what they’ve accomplished.