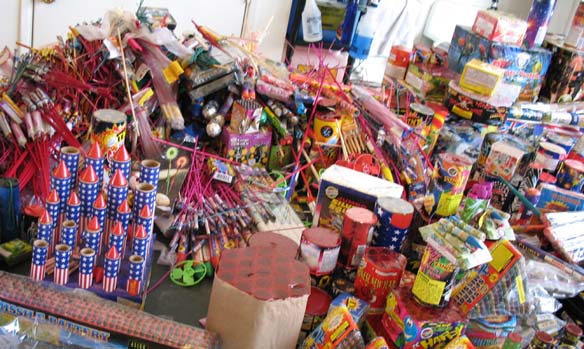 With firework stands already up throughout the city, Garden Grove police officers are raising the alert for July 4 celebrations involving the use of illegal fireworks.

With firework stands already up throughout the city, Garden Grove police officers are raising the alert for July 4 celebrations involving the use of illegal fireworks.

“This is the seventh year the police department has stressed the public’s cooperation in keeping the community safe and avoiding $1,000 citations by not using illegal fireworks.  But, based on the increased number of citations that result almost every year, the message doesn’t seem to be getting through,” said Garden Grove Police Chief Kevin Raney.

Last July 4, the Police Department issued 77, $1,000 administrative citations, which represented a 57 percent increase over the previous year.  According to Raney, a main reason for the increased citations came from officers patrolling the city in unmarked cars.  Officers will be using unmarked cars this year as well.

“We aren’t giving violators any early warning. We want them to keep in mind that they won’t know when police are driving down their street,” said Raney.

This year, the Police Department will deploy 28 additional officers for July 4 coverage, in addition to two fire investigators. Police patrols will focus on high-activity illegal fireworks areas including Katella Street, between Euclid and Brookhurst; Dino Circle; Garden Grove Park; and the Buena-Clinton neighborhood.

All parks will close by 5 p.m. on July 4.  Park tennis courts, basketball courts, and softball fields will also be locked by 5 p.m.  Park sprinkler systems will be activated at 6 p.m.

In accordance with Garden Grove Municipal Code firework regulations, discharge of safe and sane fireworks is permissible on private property only.

Relay for Life replays in GG