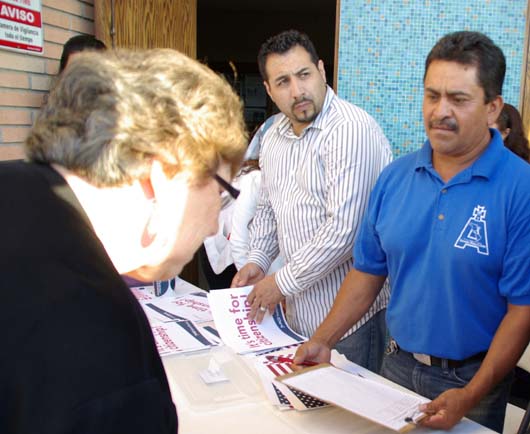 Immigration, a hotly-debated and emotional subject from the person on the street to local leaders and Congress, was the topic of discussion at St. Polycarp Catholic Church in Stanton recently during a special meeting held by the church for its people and community members.

Immigration, a hotly-debated and emotional subject from the person on the street to local leaders and Congress, was the topic of discussion at St. Polycarp Catholic Church in Stanton recently during a special meeting held by the church for its people and community members.

“Immigration is a 'basic topic' but profoundly important one,” said Pastor Fr. Michael St. Paul, “It affects all of our brothers and sisters, and the Catholic Church is here tonight to inform its people about what the church and the state has to say about immigration – we are all here on earth – taking care of God's earth.”

Signs reading, “It's time for citizenship” were handed out at the church doorway as people entered to hear the message.

There is a large and ever-growing Hispanic population in Stanton and other surrounding Orange County cities and there is concern by those who entered America illegally and those who have been here attending school that they will not be allowed to work because they are not citizens.

One young lady (speaking in Spanish) stood at the podium with her mother and passionately addressed the crowd with tears in her voice, along with her mother who was afraid to be quoted by name.

She had come to America to stay with relatives when she was young, for a better life, missing her family back home but pursuing a nursing career in the U.S. only to be told she cannot work in America because she's not a citizen.

Those who came to America through what are considered "proper channels" feel they did it right and others should do the same.

The Espinoza family (speaking in English) also addressed the crowd, saying they were a family of seven.

“All of my children are responsible people and have been dedicated to being victorious in school and are hard working,” he said. “We came to the United States without inspection in 1981; arriving here we started working; eventually amnesty was passed in 1986 and we took advantage of the opportunity to become legal U.S. residents and became U.S. citizens in 1997.”

Espinoza said he worked for different companies as a landscaper and eventually became a foreman and supervisor, a capacity he served in for more than 10 years and he also worked to get a contractor's license and to have his own business.

“I contribute to the U.S. economy by offering employment opportunities, I pay insurance, city permits and business taxes. Thanks to our hard work – we were able to purchase our first home; I am living the American Dream; I have been here for more than 30 years and this is the country I love.”

Espinoza said he knows first-hand the hardships immigrants, who don't have legal status, go through every day and that he feels if the 11 million illegal immigrants receive legal status that they will also contribute to society as his family has.

The Rev. Misi Tagaloa also addressed those gathered, saying he wants the lawmakers to help create a “family” component to the immigration bill, so families will not be torn apart by some being in the United States, while others remain in their homeland of Mexico.

"The current bill in the Senate is a “jobs”-only bill; if you are a non-skilled worker or have a special skill and can contribute to the economy, then you can get a permit and you are then allowed to stay in America and work toward a path of citizenship, but the Senate bill will not extend residency to family members,” Tagaloa said.

“Everyone knows that people exist in families; you are born into a family and before you head off to school, your first classroom is the family; your parents are your first teachers,” Tagaloa said. “Before cities were formed, we gathered  in families and before corporations offered us jobs, we worked in families; before political parties were established, we debated our views in the family; before churches, we wondered about God in our families and so families are the most fundamental organizing units of society – and as the family goes – so goes the nation.”

Tagaloa said the people had assembled at the church, to ask the lawmakers to help the 11 million undocumented workers in the U.S. to be able to keep their families together.

Tagaloa said his parents hold U.S. passports and are free to travel in and out of the U.S. and that in 1984 when his parents decided to live permanently in the U.S., his aunt and uncle in Buena Park helped their family get a start. “It was 'family' that helped us.”

Most of the meeting was spoken in Spanish and the Spanish choir sang only in Spanish; however, over-head projectors posted announcements in both English and Spanish and some Vietnamese.

It's no secret that the United States Senate has been, and continues to work on an immigration bill that will hopefully work for both sides but it has a ways to go as of yet.

The immigration reform package went to the U.S. Senate floor after clearing the Judiciary Committee and is a bill designed to make it more palatable to conservatives, which would basically expand a proto-national ID program, while allowing more funds for “border security.”

There is a proposed vote scheduled this week in the Senate but as of press time, the vote was not in.

There is the other side of the coin, where some U.S. citizens have voiced that, “If they came here illegally and there are ‘11 million’ more of them in addition to the thousands who were here illegally in 1986 when the first amnesty was allowed  – what would Mexico do if 11 million Americans illegally entered their country – would Mexican authorities be tolerant of 11 million Americans taking jobs from their Mexican people – and thinking they have a ‘right’ to education in Mexico?"

“First and foremost we as elected representatives of the people must enforce the existing immigration laws that are upheld by the law and the courts that are currently in place,” he said.

“I fully support immigration reform, as the existing immigration system is broken and must undergo a reformation that allows for the improvement of the quality of life for both those who live in this country and those seeking to be citizens of the United States.

“I believe that the U.S. Senate Comprehensive Immigration Reform Legislation needs to ensure a just and timely path to citizenship for all of the people in this country who desire to become a U.S. citizen.

“Immigration reform must respect not only those who want to become citizens but also the rights of the people who are already citizens of this great country.

"The reforms the legislature puts into law affect families and children from every walk of life and nationality.

Chang sworn in as Stanton rep