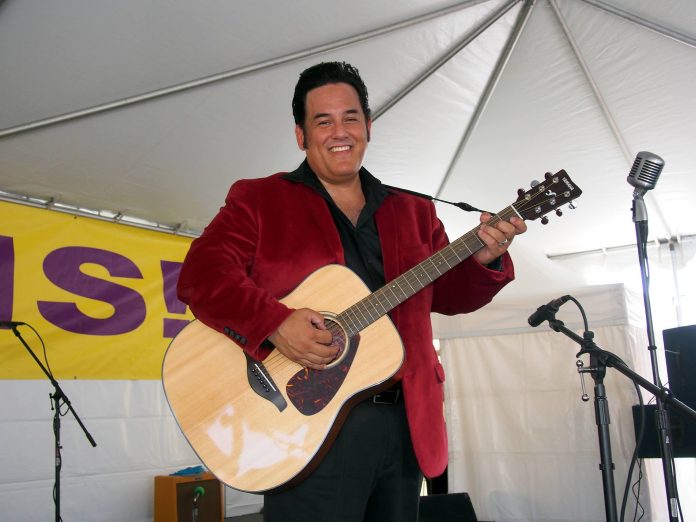 The 20th annual Elvis Festival returns to Historic Main Street in Garden Grove on Sunday, Aug. 25 from10 a.m. to 6 p.m. on Main Street.

The festival, the only event of its kind in California, brings together his music, impersonators, fan clubs, Cadillacs and all things Elvis for a daylong tribute to the King of Rock and Roll near the anniversary of his death (Aug. 16, 1977).

The event highlights include a full slate of Elvis tribute artists performing throughout the day including Kirk Wall of Anaheim, the festival’s ambassador since its inception as well as award winning entertainers Martin Anthony singing gospel hits, duets with Erika Boychenko as Ann Margret and Lisa Marie Presley and other favorites and James King on piano and guitar with a variety of the legend’s most beloved songs such as “Unchained Melody.”

Wall and his band Krazy Kirk and the Hillbillies will present a set of Elvis songs bluegrass-style along with a special tribute to the Beatles. He will also serve as the officiant for the wedding vows of longtime Elvis fans, Sylvia Ronquillo and Jesse Nava of Yorba Linda held at 12:30 p.m. during the festival.

Returning for the third year to cap off the day is Scot Bruce and his band with The Early Years of the King of Rock and Roll.

New this year is a set titled “The Inspiration of Elvis” featuring performances by non-Elvis looking vocalists singing Elvis songs ranging from ages 6 to 70 years. In addition, harpist Elizabeth Huston and accordionist Gee “Gigi” Rabe will perform instrumental versions of Elvis songs and will also accompany vocal numbers for Boychenko and Anthony.

In addition, the event highlights Presley’s love for cars, particularly Cadillacs, with a King of Cadillacs Car Show for passenger cars dating to 1977 and sponsored by the Shark Squad Motorcycle Attorneys. One of his other interests: motorcycles, will be featured in the Hound Dog Motorcycle Ride presented by Lifestyle Cycles.

Ken Sharp, a New York Times Best Selling writer who has authored or co-authored over 20 music books, will be at the festival signing and selling two of his limited-edition books he wrote about Elvis Presley: Elvis: Vegas ’69 and Elvis Presley: Writing for the King.

There will be special Elvis menu items from food trucks including Elvis cupcakes, Elvis themed ice cream flavors  along with the variety of restaurants and shops.  Among the restaurants is Azteca Restaurant known for its Elvis themed atmosphere with movie posters, photos and memorabilia donning the walls and the ceiling. Next door is Kaye’s Kitchen, which will feature a Grilled Peanut Butter and Banana Sandwich, an Elvis favorite, on the menu during the festival.

The festival on Historic Main Street is located between Garden Grove Boulevard and Acacia Parkway in Garden Grove. Use the address of 12911 Main St., Garden Grove, on GPS or other map/directions locators. Parking is available at adjacent lots of Concorde and Coastline College.

More information and complete schedule is available on Facebook by locating the 20th Annual Elvis Festival page, or by sending an email to elvisfestival@yahoo.com or calling 714-267-4657.