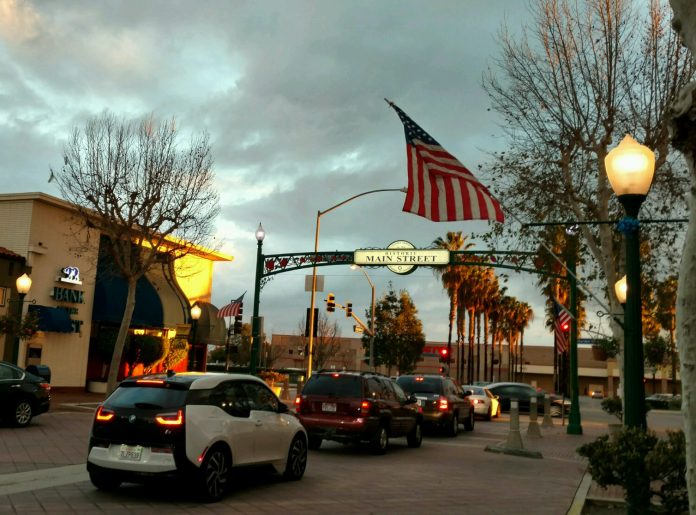 BY LOREEN BERLIN: The year was 1966. The Garden Grove Planning Commission proposed making

Euclid Street a straight line from north to south. That left a small portion that ran

through the original business district with a name dilemma: Should it be called "Old

business owners on that portion of the street had a different idea.

BY LOREEN BERLIN: The year was 1966. The Garden Grove Planning Commission proposed making

Euclid Street a straight line from north to south. That left a small portion that ran

through the original business district with a name dilemma: Should it be called "Old

business owners on that portion of the street had a different idea.

So, with that in mind, on Aug. 23, 1966, Downtown Merchants Association President Vern Martin headed out to a City Council meeting to speak his mind.

He wanted the street in front of merchants display windows to be officially, "Main Street."

Martin, 94, and a veteran of WWII, still remembers.

"I just didn't feel 'Old Euclid" was a good fit for our businesses," said Martin. "It

For more than 50-plus years, it's been Main Street.

Martin, formerly from Brookings, S.D., said his family moved to Long Beach when his

Martin didn't move with them. He had enlisted on his 20th birthday and served in the Army Air Corp, 14th Air Force in WWII, headquartered in China. His father was

part of the ASTP, an Army Specialized Training Program at South Dakota State College in Brookings, and was the civilian manager of the Post Exchange at the college.

According to the book, "Scholars in Foxholes," by Louis Keefer, during WWII

"I spent a year-and-a-half in the technical training schools in the Army, studying the

assembly and operation of radio and was in the top 10-percent of my graduating class in radio mechanics," said Martin. "Then, I was given the opportunity to attend a secret program called 'radar,' where I learned how to repair, install and calibrate a number of radar sets that were airborne in our airplanes.”

After graduation from the radar school, Martin was sent to Langley Field Air Force Base in Virginia.

Ultimately, Martin was sent to Okinawa by ship; by the time they arrived in Okinawa, both A-bombs had been dropped and so they just waited to go home. That was 1945.

He went to a Vancouver barracks and then to Southern California, where he was honorably discharged and became a civilian again.

Martin's parents were living in Long Beach. The Martin family moved to Garden Grove on Stanford Avenue where they purchased a 2 1/2-acre chicken ranch.

He married Wanda Armour-Martin in 1949; they have been married for 67 years.

In 1947, a vacant building in downtown Garden Grove on what was then Euclid Street became available, so his father, brother and Martin began making the building into a men's clothing store, called ”Martin's Men's Store."

That was two doors south of the parking lot on the east side if the street.

"In 1951, we purchased the First National Bank Building on the northwest corner of

Garden Grove Boulevard and Euclid Street. We remodeled the building and then

moved into that building and called it, ‘Martin's Inc. Clothier,' and ran the store for 20 years on Euclid Street and Main Street in two different locations,” Martin said.

"In 1967, my parents reached 65 and wanted to retire; I'm color-blind so it wouldn't havebeen good to continue, and so we sold the store’s merchandise," added Martin. "Before the city realigned Garden Grove Boulevard, the building was purchased by the city and then torn down, but there is a commemorative brick in the sidewalk honoring Martin's Clothier."

Martin is currently active in the Garden Grove Historical Society, where he fixes

anything that needs repair. He's a member of the Garden Grove Masonic Lodge and he and his wife attend Garden Grove Methodist Church.

In 2010, an "Historic Main Street" sign was put in place at the south end of Main Street at Garden Grove Boulevard, along the archway over Main Street.

Historic Main Street is getting busier and has a lot of activity along the street,

Every Sunday, Historic Main Street is host to a Farmers Market from 9 a.m. to 2

p.m., with a wonderful array of fresh vegetables, plants and honey and nuts.

The Elvis Presley Festival — which takes place in August — has became an annual attraction on Historic Main Street, as well.

It’s called “The King Lives On.”

So does Main Street. 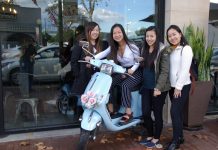 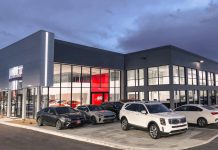 Is Main Street turning into a hot spot?