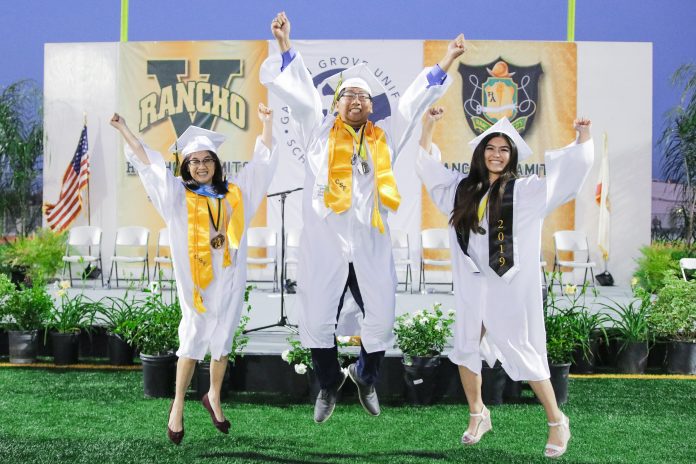 More than 3,300 high school seniors from Garden Grove Unified School District (GGUSD) graduated from the district’s eight high schools during commencement ceremonies held June 13 and June 14. The Class of 2019 has an impressive list of academic accolades and exciting plans for college, career, and lifelong success.

Among the Class of 2019, 1,050 students report that they have chosen to attend a UC or CSU school.  GGUSD students consistently beat the county and stage average on completion of rigorous a-g college entrance exams.

Students in the Class of 2019 finished high school with more than 7,800 Advanced Placement courses completed and 57 percent of GGUSD seniors completed one or more AP course, many with college credits already under their belts.

“Every year, we are impressed with the caliber of our graduates and we are proud of all they have accomplished during their educational careers in GGUSD,” said Board of Education President Lan Nguyen.  “The future looks bright with GGUSD graduates ready to tackle exciting career goals and rising up as the next generation of community leaders.”

During the commencement ceremonies, district students and families heard from valedictorians who reflected on their high school experience and looked ahead to exciting futures.

Bolsa Grande High School valedictorian Jamie Vu is a National Merit Commended Scholar, trilingual in English, Spanish, and Vietnamese, and will attend UCLA in the fall to major in Psychobiology.

Garden Grove High School co-valedictorian Nghiem Pham earned a full ride to MIT, where he will major in linguistics with the career goal of becoming a college professor and researcher. Garden Grove High School co-valedictorian Anabella Pham excelled in the Orange County Mock Trial program, and will attend UCLA in the fall to major in political science with plans for a life of public service as an elected official or judge.

For the second year in a row, all seven comprehensive high schools were named to U.S. News and World Report’s elite rankings as America’s Best High Schools.

The district is committed to equipping students with the academic and personal skills for lifelong success, teaching students about motivation, grit and perseverance.

Hare High School valedictorian Angel Pivaral demonstrated perseverance coming to the United States from Guatemala his sophomore year knowing very little English, but mastering his goal of graduating on time with a 4.0.  He plans to attend Cypress College with a goal of transferring to a four-year university to major in biology and become a surgeon.

Several of the district’s valedictorians aspire to pursue careers in the medical field including La Quinta High School’s Hillary Nguyen, who will attend Yale in the fall to major in neuroscience and was selected as one of 300 students nationwide to receive a four-year full-ride Gates Scholarship.